Fourier Transform Infrared (FTIR) Spectroscopy bases its functionality on the principle that almost all molecules absorb infrared light. Only the monatomic (He, Ne, Ar, etc) and homopolar diatomic (H2, N2, O2, etc) molecules do not absorb infrared light. Molecules only absorb infrared light at those frequencies where the infrared light affects the dipolar moment of the molecule. In a molecule, the differences of charges in the electronic fields of its atoms produce the dipolar moment of the molecule. Molecules with a dipolar moment allow infrared photons to interact with the molecule causing excitation to higher vibrational states. The homopolar diatomic molecules do not have a dipolar moment since the electronic fields of its atoms are equal. Monatomic molecules do not have a dipolar moment since they only have one atom. Therefore, homopolar diatomic molecules and monatomic do not absorb infrared light . But all other molecules do!
Most FTIR spectroscopy uses a Michelson interferometer to spread a sample with the infrared light spectrum and measure the intensity of the infrared light spectrum not absorbed by the sample. FTIR spectroscopy is a multiplexing technique, where all optical frequencies from the source are observed simultaneously over a period of time known as scan time.
The spectrometer measures the intensity of a specially-encoded infrared beam after it has passed through a sample. The resulting signal, which is a time domain digital signal, is called an Interferogram (Figure 1) and contains intensity information about all frequencies present in the infrared beam. This information can be extracted by switching this signal from a time domain digital signal to a frequency domain digital signal, which is accomplished by applying a Fourier transform over the interferogram and producing what is called a Single Beam Spectrum. Another characteristic of this signal is that it is a statistically stationary signal, so the higher the number of scans of which this signal is composed, the better the estimate that can be extracted from the data. 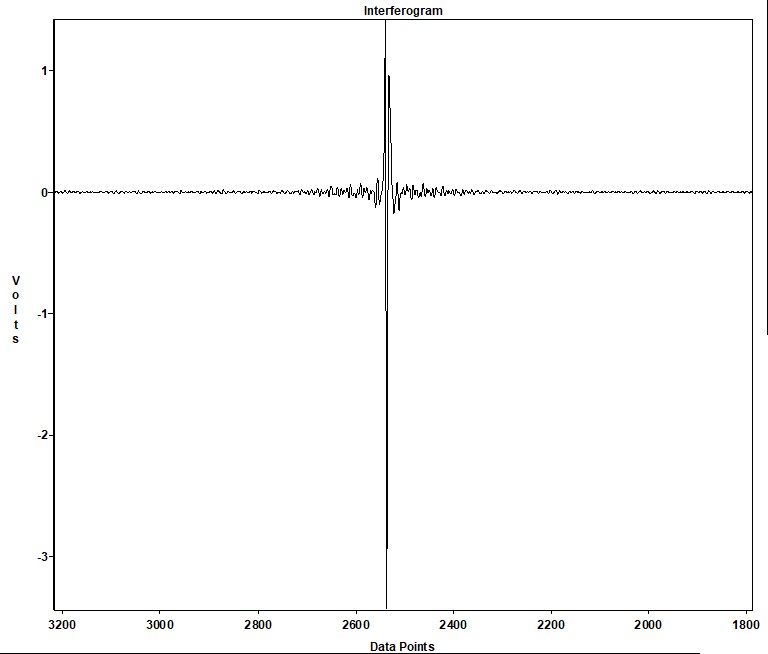 As mentioned earlier, almost all molecules absorb infrared light, and each type of molecule only absorbs infrared light at certain frequencies. This property provides a unique characteristic for each molecule. It provides a way to identify the molecule type (Qualitative analysis) and the amount or quantity of this molecule in the sample (Quantitative analysis). Since each type of molecule only absorbs at certain frequencies, it provides a unique absorption spectral pattern or fingerprint through the entire infrared light spectrum. In this way, the more molecules of the same type in the sample, the more infrared light is absorbed at those specific frequencies at which those molecules absorb infrared light.
As an example, Figure 2 and Figure 3 show two of the moisture fingerprints with absorption bands centered at 1596 and 3756 cm-1. Figure 2 presents a moisture concentration of 10 ppm/v, and Figure 3 presents a moisture concentration of 100 ppm/v. We can observe, by looking at both figures, that they present almost identical patterns, but the sample with the most moisture has higher peaks (observe higher Absorbance values on the ordinate scale).

Figure 2 Moisture @ 10ppm/v in the mid-infrared region
The height of the peaks are defined by the Beer-Lambert relationship (or Beer’s law). Beer’s law states that the concentration C is directly proportional to the absorbance A.
This is
Eq. 1

where a is the absorptivity of the molecule and b is the pathlength or distance that the light travels through the sample gas.

Figure 3 Moisture @ 100ppb/v in the mid-infrared region
It is important to notice at this point, that the absorptivity coefficient of a molecule at a given portion of the spectrum is different for different types of molecules. This coefficient is directly proportional to the number of moles present in the sample, and as such, pressure and temperature variations in the sample will affect to total number of moles in a given space. Therefore, at a higher pressure the absorptivity coefficient is higher than at a lower pressure, and this coefficient is lower at a higher temperature than at a lower one.
This relationship can be used to determine the concentration of a molecule in a gas by comparing the height of a maximum absorption peak of the molecule in a reference gas spectrum to the height of the corresponding peak in a sample spectra.
An absorption spectrum is calculated by performing the logarithmic ratio between a sample single beam spectrum ‘sample’ (Figure 5) and a background single beam spectrum ‘background’ (Figure 4). The sample measures the intensity of the infrared light reaching the detector with a sample placed in the path of the encoded infrared light. The background is a single beam spectrum that measures the intensity of the infrared light reaching the detector without any sample. The frequencies of infrared light radiation that are absorbed and the strength of these absorption bands are determined by the sample’s chemical makeup.
It is important to note that the single beam background spectrum is used as a point of reference to determine the absorption of a sample inside the sample compartment. This background reflects the conditions inside the

Table 1 Composition of the Atmosphere

Real-time Gas Analysis
FTIR Spectroscopy offers the best characteristics to perform real-time detection of moisture and other impurities that may be present in the corrosive gases used by the Semiconductor Industry. Since the infrared light detector is not in contact with the corrosive sample, it is not affected and the instrument can therefore be set for a continuous operation and scanning of the sample.
The real-time gas analysis is performed through an FTIR Spectrometer, which contains a special gas sample compartment (gas cell) that is connected directly to a gas line that supplies the sample gas. Since the spectrometer is connected directly to a computer, the spectrometer can be set to perform continuously an x number of scans of the sample gas and store this data as an interferogram. Every time an interferogram is completed, the computer retrieves this interferogram from the spectrometer and performs the quantitative gas analysis of the impurities.
Spectrometer
The use of FTIR spectroscopy for gas analysis requires special considerations due to the fact that the gases inside a specific volume, compared to against a solid or a liquid, have a significantly smaller number of molecules over the same volume. Therefore, the total amount of infrared light absorbed by the gas is a lot less than the total amount of infrared light absorbed by a liquid or a solid, producing a weaker absorption signal and decreasing the detection limit of the spectrometer over gases.
The detection limit of the instrument can be increased if the infrared light travels a longer path through the gas sample or if the gas pressure inside the sample compartment is increased. The increase of pressure inside the gas compartment is not usually pursued since this will increase the quantity of the gas consumed per sample. The path that the infrared light has to travel through the sample gas can be increased considerably by using a long path gas cell to sample the gas. The long path gas cell increases the path by receiving and reflecting the infrared light multiple times inside its body before it lets the light go out and be received by the infrared detector. So the longer the distance the infrared light travels the more infrared light is absorbed by the sample gas, which increases the height of the absorption peaks and makes them easier to detect.
The use of an FTIR Spectrometer requires continuous purging with dry nitrogen. This purging provides a stable environment for the spectrometer and reduces interfering impurities inside the spectrometer (see Table 1); otherwise the variation of these absorbing impurities inside the spectrometer will count as part of the gas that the system is sampling.
Long Path Gas Cell
The use of a White cell (see Figure 6) provides a very high percentage of light transmission, which is important for observing spectra that are very weak or compounds at very low concentrations. It can be used for any gas that does not injure the mirror surfaces.
Since SPGAS is designed to analyze corrosive gases, the gas cell construction and mirrors must withstand such gases. A 4Runner gas cell from CIC Photonics was selected for our system since it was specifically designed to handle corrosive gases. This gas cell offers a 4-meter pathlength and a low 0.6-liter volume. The 4-meter pathlength allows the detection of moisture impurities at ppb concentration levels. The gas cell has a heating element attached to the outside wall. This heating element in conjunction

Figure 6 White Cell Design
with the temperature controller can heat the inside walls and mirrors of the gas cell, reducing moisture inside the cell.

To provide the most robust FTIR Technology for gas analysis.